Upper School math teacher Chip Rollinson uses a variety of web-based tools with his students including the Desmos graphing calculator. This free website allows anyone to create and manipulate mathematical functions that are also displayed in a corresponding graph. For example, here is the equation and its result for an ellipse: 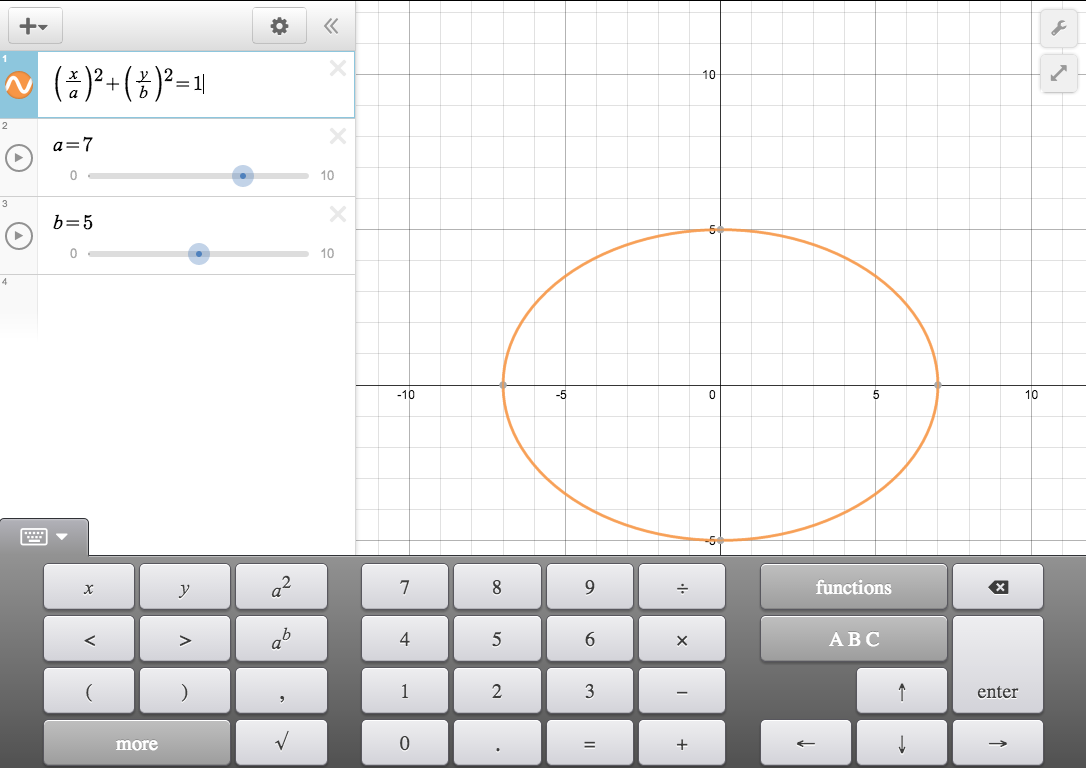 Doing this kind of work used to require expensive software or a graphing calculator. Now it is accessible online for free. Anyone with a web browser can get to it. Tools like this are a great example of why students should have ubiquitous access to computers and the internet.

Here is a link to Mr. Rollinson's presentation on this tool that he put together for a summer workshop of mathematics educators.
Posted by Demetri Orlando on Monday, June 23, 2014

This is the second post in a series about the use of the Makey Makey for faculty professional development in technology, design, and creativity. The first post is accessible: here.

As I described in my last post, the first incarnation of my Makey Makey project, was a relatively inelegant "instrument" I hacked together using some fruit, kitchen utensils, and a Google Coder project. I left the project out in our faculty lounge for a few days, in the hopes of garnering some interest in attending our first "play day" coming up next month. The project seemed somewhat of a success, since I observed several instances of tones, laughter, and what I interpreted as "contemplative silence" emanating from the lounge while the project was up. A few folks even emailed me either thanks or excited exclamations of "that's cool!" Thus, at least in terms of garnering attention from my colleagues, the Makey Makey project was turning some heads, and encouraging some play. The project seemed also to inspire a little bit curiosity with regards to electrical circuitry, mostly around how people did not get "shocked" when holding the electrical leads. Some people also began experimenting with different conductive materials, swapping out spoons to pencils or other fruit.

For Phase 2, I decided to up the sophistication of the project, creating a conductive "board" to replace the dangling fruit and wires, and rather than using simple tones on the C major scale, to embed some free loops from GarageBand. The browser I'd be using to display the project is Google Chrome, which can read and play .mp3 files. This created a minor obstacle, because GarageBand loops come in a completely different file format. To work around this, I added each loop to a separate GarageBand project, and then exported each project in .mp3 format. Problem solved. I then found some copyright-free images online (thanks Wikipedia!) to match the GarageBand loops I used. After a couple of more tweaks to the user interface, I had a web page that looked like this:

For the board, I used the underside of a printer paper box, aluminum foil, scotch tape, and an exacto knife to carve out and affix some conductive "pads." For each of the five pads, I used a wide strip of foil, stretching from the bottom of each pad to the top of the "board," where I could easily attach the leads from the Makey Makey. For the ground lead, I made an aluminum foil strip at the bottom of the board.

I then uploaded the site to the computer in the faculty lounge, and left a little flier of instructions, with a small plug for our "play day" in June. Fingers crossed that this iteration will pick up where the last one left off...